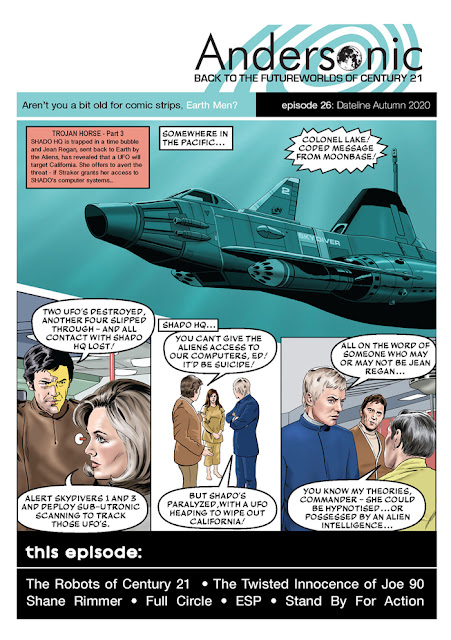 Issue 26 of Andersonic is now available to order.

The Child with the Man in his Eyes - a look at Joe 90 from a modern perspective.

When the Machines Rock - a look at the robots and AI of the Anderson series.

The final part of our UFO comic strip ‘Trojan Horse’. The A-Z of Captain Scarlet.

The issue comprises 44 pages with colour covers and b/w interior.

To order: please send a Paypal payment to andersonicfanzine at outlook dot com - with your address and the issue number(s) in the 'notes' section.

The issue is also available via eBay for a limited period - the link is here.

A number of back issues are still available, please see our previous blog post.

Please bear in mind that lockdown conditions may cause delays in postage. 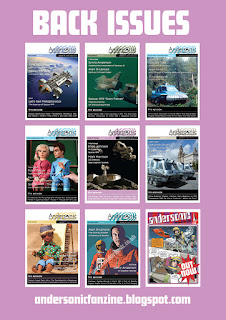 We have a number of back issues of Andersonic available. Each issue features interviews, insight and opinion on aspects of the Andersons' series. The following issues are available as of this date: UPDATED 26/02/2021

Mary Turner Interview - Mary discusses her work on the 1960s APF/ Century 21 puppet series including Stingray, Captain Scarlet and Thunderbirds.
Ken Holt Interview - Ken discusses his time as Century 21 Production Manager.
Space: 1999 'Black Sun' - a look at David Weir's first draft script.
Episode review - UFO/ The Cat With Ten Lives
Strip Story - a reappraisal of the Fireball XL5 strip 'Electrode 909' from TV21.
Thunderbirds at 50: Our writers look at the first half century of the Andersons' most famous series.
... and more.

Brian Johnson Interview - Brian discusses his work on the APF puppet series including Stingray and Thunderbirds, as well as his work on Space: 1999.
Mark Harrison Interview - Mark discusses his work as CG Director on New Captain Scarlet.
'Thunderbirds 1965' Set Visit - during the making of 'The Abominable Snowman'
'Beautiful Dreamer': Dream Episodes in Century 21 - examining the worth of dream episodes in the various series.
A review of TV Cenury 21 Issue 1 from the depths of 1965
Episode review - Space:1999/ Another Time, Another Place
Thunderbirds are Ga-Ga-Goo-Goo episode guide, Reviews and much more
Issue 22 -
David Palmer Interview - David discusses his time working in the Century 21 Special Effects Workshop.
Archive Gerry Anderson interview - Gerry discusses Space: 1999 in part two of this interview.
'Savers Are Go' - a look behind the scenes of the Thunderbirds-themed Halifax TV advert.
Strip Story - Voyage of Disaster, a UFO comic strip from TV Action, 1972
Red Arrow kit conversion - how to convert a Saab Draaken kit into this plane from Thunderbirds/ Edge of Impact
Spirit of the Age - a look at the spiritual side of APF/ Century 21's many series.
Episode reviews - UFO/ The Psychobombs, Captain Scarlet/ The Trap and Space:1999/ Breakaway
The A-Z of Space: 1999 (Year 2)
Pop-Up Props, Things You Do (when you're a fan) ...  and more

Joy Cuff Interview - Joy discusses her time sculpting characters for Thunderbirds and also working with Kubrick on 2001.
The Lost City - a look at the influence this early Supercar episode had on the Andersons' subsequent series.
Identified Flying Object - a feature on the eponymous UFO from the series of the same name.
Anderson Title Sequences - what makes them so good?
Episode reviews - UFO/ Sub Smash, Stingray/ Star of the East/ Eastern Eclipse and Space:1999/ The AB Chrysalis
The second part of our new UFO comic strip ‘Trojan Horse’
The A-Z of Space: 1999 (Year 2)
...  and more

Payment via Paypal (to include your postal address) to crater101 at btinternet dot com.
Andersonic is run on a non-profit basis.

Our most recent issue - Andersonic 25 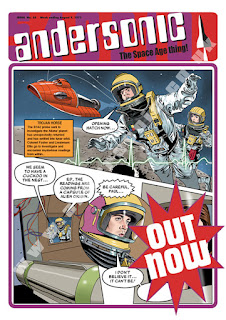 Our most recent issue is no. 25 which is still available. It features:

Joy Cuff Interview -  Joy sculpted numerous characters for the first series of Thunderbirds including Jeremiah & Ma Tuttle and the Duchess of Royston, and later went on to work with Stanley Kubrick on 2001. Joy recalls her time on both productions and shares her collection of rarely seen behind-the-scenes photographs.

Anderson Title Sequences -  What makes a good title sequence? Does the source material have to be any good or is it just down to slick editing and a good theme?

Stingray/ Star of the East/ Eastern Eclipse - Mike Coldwell takes a look at El Hudat's two episodes of Stingray, with input from David Graham (the voice of El Hudat himself).

The Lost City - The influence of this episode of Supercar on the subsequent APF and Century 21 series.

To order: please send a Paypal payment to andersonicfanzine at outlook dot com - with your address in the 'notes' section.

Please note that we won't be posting any issues until lockdown is lifted in the UK.
at June 02, 2020 No comments:

Welcome to the new online home of Andersonic. We've had to move our online presence at short notice so this will be our base of operations for the forseeable future. It's where you will find news and details of our upcoming issues and the availability of back issues.

So what exactly is Andersonic? It's an A5 paper fanzine which covers the films and television series of Gerry and Sylvia Anderson. Each issue contains features and articles which explore and discuss their many series, from the black and white Supercar and Fireball XL5, 60s series Stingray, Thunderbirds, Captain Scarlet, Joe 90 and The Secret Service; the live-action series UFO and Space:1999 and later stuff such as Terrahawks and New Captain Scarlet. In previous issues we have also covered the films Doppelganger and Into Infinity. We have featured interviews with, amongst others, Mike Trim, Dominic Lavery, Shaun Whittacker-Cook, Jan King, Robert Easton, Tony Harding, Brian Johnson, Mary Turner, Ken Holt, David Elioitt, Alan Perry and Mike Noble.

Andersonic is published every 6 months (very approximately) and is available to buy via this blog plus one or two other outlets, and via eBay around the time of publication. The majority of issues are still in print and available from this site. Everyone on our mailing list will receive an email informing them of these changes. If you'd like to be kept informed of the availability of current and future issues, please contact andersonicfanzine at outlook dot com and you'll be added to the mailing list.

Issue 26 of Andersonic is now available to order.   The new issue features:  The Child with the Man in his Eyes - a look at Joe 90 from a...